It has been decades, wow, yes decades since I saw one of my all-time favorite singers perform—Sandi Patty. And now, I will be attending a Forever Grateful, the Farewell Tour...


Sandi Patty is one of the most highly acclaimed performers of our time with five Grammy® awards, four Billboard Music Awards, three platinum records, five gold records, and eleven million units sold… Sandi Patty is simply known as The Voice. She is the most awarded female vocalist in contemporary Christian music history, with 40 Dove Awards and was inducted into the Gospel Music Hall of Fame in 2004.Sandi was introduced to the world with her rendition of The Star Spangled Banner during the rededication of the Statue of Liberty in 1986. Virtually overnight she became one of the country’s best-loved performers.

Her voice has a pure quality that seamlessly transitions from note to note, but with a force of power that you are blown away...and the most amazing part is hearing her live performance. I was even more astounded. In today’s musical world, where auto tune creates stars and a live performance has to be supported with tracks, it is harder to discover a singing talent that performs better on stage than their recorded selves.  Not Sandi, her talented voice hits every note with strong accuracy and then it seems to penetrate your skull and vibrate your whole being with its intensity. You do more than listen to her song, you literally feel it go through your body!

I can remember it so well. It was the late 80’s, Sandi was a powerhouse Christian singer and I was a chaperon for our youth group to a concert in Mobile, Alabama. It was my first time to see Sandi in concert. It was incredible. 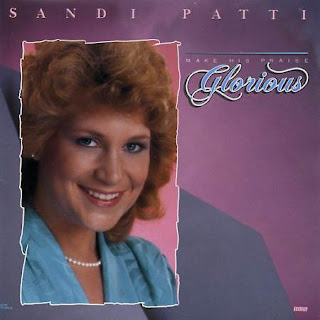 Not long after, I was driving to New Orleans in a little pickup truck, very pregnant with my firstborn to pick up my Aunt Boopie from Gretna so we both could see her perform at the Lakefront Arena. If I could have become a roadie, I would have just to hear her beautiful voice again and again. Instead, I bought an album.

As an amateur singer, a wife to a Southern Baptist Music Director, it became standard to sing Sandi Patty songs at church. We all tried. Maybe we could hit the notes she hit, but no one, and I mean no one could transform them into music magic like she could. We all paled in comparison, but the songs were so beautiful and we did our best to impersonate her.

What’s better than one great voice….TWO!

By herself, she is pure majesty but Sandi Patty is known for the dynamo, blowout duet.

Larnelle Harris, Steve Green, and Wayne Watson all had these stratospheric duos that took us straight to Heaven’s Door. They evoked a high that made you say, “Ok, we ready now, let’s load up and go!”

In the 90’s, a very dear family friend requested me to sing the Sandi Patty version of It is Well for his mother’s funeral. I did. Then it was banished from my song inventory because he, Chris King could not bear hearing it. His only exception was for his own funeral. Nearly 20 years later, he revisited that request in his last week of his life to have me sing it -- that was less than a month ago. Chris was 48 and he loved Sandi Patty. As this grief is still raw, I had already purchased my ticket to see the farewell tour. I guess Chris had his own farewell tour in mind.

Sandi has been such a part of my life all these years, but the one connection I will always have with her and her music is that the last song my husband, Norman and I sang together in church a week before he was tragically killed was none other than, Another Time and Another Place, her beautiful duet with Wayne Watson about Heaven.

Another Time and Another Place

Thanks Sandi, you have touched so many lives with that beautiful instrument, but as for me, you have inspired, mentored, challenged, evoked emotion in me through my adult life as I walked through the pitfalls, the highs, and quiet moments of life. Your voice is ever near, encouraging me, bringing my spirits up, cheering me, or your songs are on my lips mimicking you as I go.

I lift your talent on high, but realize you are a real person, with real issues and do not profess to be that perfect person or perfect Christian who has it all together. You come across as someone you can sit with and share your stories and laugh.

My decades of listening to you has been has been More than Wonderful and you have made my life better.

How lucky am I that I was able to have a Sandi Patty song ready to play in my head, or on my record player, cassette player, CD player, and mp3 player.

The good news is when I reach Heaven, Sandi and I can sing an epic duet even though I will probably be standing in line a few centuries waiting my turn for the opportunity. But, it will be worth the wait.